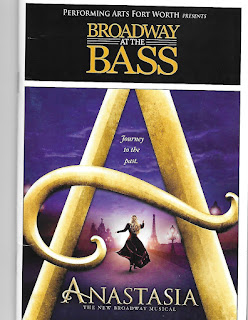 Two Sundays ago, I cleaned up for the theater and treated myself to a matinee musical at Ball Hall. The touring production of Anastasia was topnotch.

In a journey to the past, we see a glorious life in czarist Russia- beauty and splendor. In just a few scenes, shots ring out and the family is dead. Clever scene changes bring us to a young girl sweeping streets for money. She meets two con men who decide she could pass for Anastasia, the young daughter of the Czar. Myth and rumor says she's alive and her grandmother in Paris is offering a reward for her safe return.

Strange circumstances, dreams, comments make this girl more than just a pawn for these men. Maybe?  Just maybe?  She could truly be Princess Anastasia.

The show through song and dance weaves this old tale into magic. Voices were strong. Acting was very good. The sets were gorgeous - one of the prettiest shows I've seen. It was a splendid afternoon where an audience was whisked by theater to Russia and Paris. Anastasia.... I believed in her.