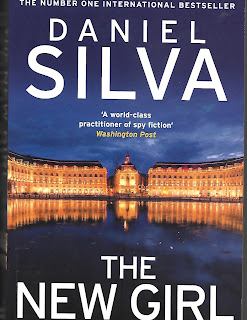 This time he’s called by Khalid bin Mohammed, the crown prince of Saudi Arabia – a man celebrated  for some  reforms and reviled for his role in the murder of a journalist. Now his only daughter is missing from an exclusive Swiss boarding school. While Gabriel has fought terrorists, jihadists, and regards Khalid as a flawed leader, he respects Khalid’s love for his daughter.  The stakes are high and this is far more than a kidnapping.  Gabriel will fight any in the secret war for control of the Middle East.

From the back blurb – Both men have made their share of enemies. And both have everything to lose.

Daniel Silva knows how to write a page turner – a book with strong characters, ripped from the headlines plot lines, and a solid knowledge of the Middle East and  politics. Silva has done research and analysis of issues.  At times his books are almost too ahead of the news cycle – it’s rather scary.  But, as a reader, we count on Gabriel Allon and his  wily crew  of Israeli spies to save the day. The New Girl  is a work of fiction and an entertaining read.