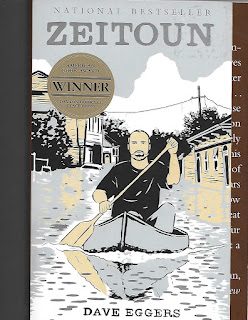 Dave Eggers is a master writer and with Zeitoun, he brings the harrowing hell of Hurricane Katrina into focus, as he writes about Abdulrahman and Kathy Zeitoun. These hard working, high achieving folks in New Orleans are caught in two disasters – the war on terror and the response to Hurricane Katrina. This non-fiction book reads like an adventure tale, and you root for these folks to come through quite a storm.

Zeitoun (he goes by his last name) is from Syria, a citizen of the USA living in New Orleans with his American wife, Kathy. They run a Painting Contractor business and have a lot of jobs and responsibilities throughout the city. They monitor the storm news on Katrina with growing concern. She finally decides to take the kids and head to family in Baton Rouge. Zeitoun chooses to stay to take of the house and properties. He’s adept at prep work, hauling things to upper floors, nailing up boards, etc. How bad could it be?

As we know, Katrina was a monster. It hit fiercely and then worse as levees broke. People were trapped, and chaos slowly built. Zeitoun had a kayak and used it to row through the flooded streets. He helped folks or made note of their location, so larger police boats could do rescues. Everything seemed okay and while scared, people were working together. And then another level of trouble began as a bad element entered to steal. In the confusion, at his own home, he’s dragged up and hauled to a makeshift prison. He’s put with other Muslims, equally as confused as to their status and why they are under arrest. No phone calls to his wife or to a lawyer. Meanwhile, Kathy is frantic – trying to find out if he’s alive, and what’s going on.

Trust me, as you read Zeitoun, you’ll feel outrage, concern, and many other levels of emotion at the full story of this man’s life during the Katrina hurricane and aftermath. Dave Eggers does an excellent job in telling this tale, and you’ll be impressed by our hero and his wife. His calm in crisis, his faith in America, his strong spirit, and his brother back in Syria who refused to lose him in the system, are all factors in making this a must read.