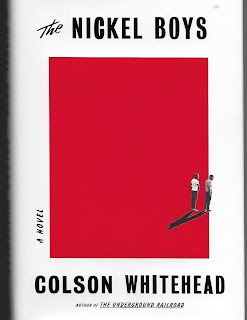 I am a huge fan of Colson Whitehead's writing. The Underground Railroad blew me away. Now with The Nickel Boys, I think his writing is even better.

Elwood Curtis lives in the black area in segregated Tallahassee, but the Civil Rights movement is stirring and he's in awe of Martin Luther King's words. As a high school senior about to take classes at a local college, he's ready for the world. His grandmother has kept him on the straight and narrow.

cover blurb:  But for a black boy in the Jim Crow South of the early 1960s,  one innocent mistake is enough to destroy the future.

Elwood finds himself at the Nickel Academy - its mission is to provide moral training. It's true goal - to break down the soul of "colored" delinquents.  Elwood tries to hold on to Dr.  King's words, but his friend Turner thinks that Elwood is worse than naive, that the world is crooked,  and that the only way to survive is to scheme and avoid trouble. (cover)

Colson Whitehead's The Nickel Boys is based off of a real life reform school in the South, where horrors came to the forefront. You'll root for Elwood's ideals and hope for the best. Twists and turns abound, and through it all the writing is stellar, the characters rich, and you'll shed a tear for the torment of tough times in the 1960s South.
Posted by Joanne at 6:00 AM