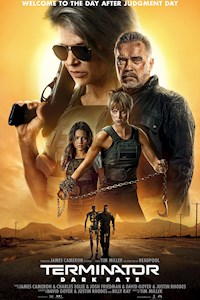 Terminator: Dark Fate was written and produced by the originator – James Cameron. He did not direct this, but all of his masterful touches are there.  Forget a bunch of the Terminator sequels and just go into this one fresh. This movie opens in Mexico when there’s a lightning disturbance and out from the sky drops Grace (Mackenzie Davis) – she’s an augmented human sent to earth to protect Dani (Natalia Reyes), a young Mexican gal, who has no idea how important she is to the future of Earth.

Forget Skynet, etc. Now it’s another force sending Terminator Version 9.0 and this is one bad dude. The initial fight sequence, chase, shootings, car chase, bulldozer incident, etc is intense and certainly kicks off  Dark Fate. Ray leaned over and whispered, “I’m exhausted.” And fortunately, Sarah Connor (Linda Hamilton!) is there – world weary, raspy voice barking orders, no-nonsense sense of the situation, and she’s been fighting Terminators since one killed her son. Now Dani is the mission.

This movie is kick-ass sharp and yes, he’s BACK – Arnold – is on “our” side and ready to help Sarah and Grace to save Dani.  I  won’t spoil any more of the plot.  It’s all familiar and yet has some new twists. The special effects are fabulous. The pacing of the film is non-stop. You will be exhilarated and hyped by the end of the film. Terminator: Dark Fate is meant for the big screen, so get that tub of popcorn and immerse yourself in the dark fate of the world. Enjoy!