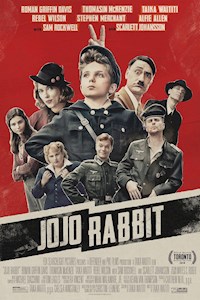 The previews to JoJo Rabbit may look a tad bizarre, maybe even off putting. On the contrary this is a nifty little artsy film that will touch your heart.

Written, directed, and acting - Taika Waititi - has truly hit the right notes in regards to confronting nationalism. Johannes (JoJo played by Roman Griffin Davis) is ten and totally psyched to go to Hitler youth camp. He's got the uniform, the knife, and his imaginary "friend" Adolf Hitler (played by Waititi) pops in to pump him up.

Never fear, JoJo is truly a kid with a heart and soul. Stuff occurs at the camp that make him question mob mentality. Back home, different walks with his mother and things she says (Scarlett Johansson) demonstrate she's working with resistance. And after hearing strange sounds, JoJo discovers his mother's been hiding a 17 year old Jewish girl (Thomasin McKenzie) in a cupboard space in his sister's room. He's not sure what to do with this information and in talking to her he has to acknowledge to himself that she's okay - not a monster.

A lot happens in this ninety minute movie - there are some funny bits just because JoJo is so dorky, and Hitler is so ridiculous. But trust me, it's poignant, deep, and the kid is SO darn good in this film.