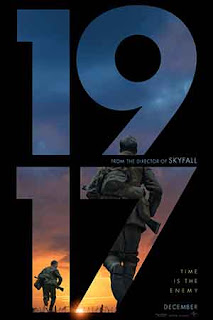 1917, a movie directed by Sam Mendes is absolutely superb. It’s WWI and there appears to be a retreat by the German forces in a no-man’s land in France. But no – it’s a trap, and two messengers are sent to warn a British commander to not attack. Don’t put sixteen hundred men into a sure death. The key – one of the messengers, Blake, has an older brother in a regiment there.

Just think, no cell phones, no fancy radars and instant communications. Telephone lines were cut. In one long camera move, we follow our lance corporals through mud, trenches, rats. It’s immersive and horrifying. Dean Charles Chapman is Blake. George MacKay is Schofield, his buddy. Together they are pushed to extremes – straight ahead, past the dead horses, watch for the craters. It’s foggy and mucky and tension filled. Time is of the essence and Mendes keeps the pace moving along with our heroes.

Do the lads make it in time to save their troops?  I won’t tell. You have to see it on the big screen, be under siege yourself from the elements and from fear. Abandoned places…and then shots ring out.  Mendes said, “I wanted something that had the quality of a dream at times, but had real-life stakes.” He succeeds, and so do these actors. War is hell.