Z is for Zero Day by David Baldacci 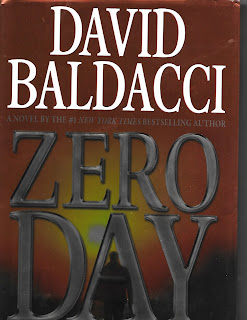 I have not formally participated in the April A to Z Blogging, but coincidentally I read Zero Day by David Baldacci and decided to make it a Z post. What the heck - congrats to all who completed a full month. I salute you.

Mr. Baldacci knows how to write a thriller and Zero Day does not disappoint. Plenty of twists and turns in the wilds of coal mining country, West Virginia.  John Puller, a combat vet and military investigator in the US Army Criminal Investigation Division is called out to a case in WV. A family has been slaughtered, the father was military. Then deaths across the street occur. Hmmm. And he's the only one on this case.

Drugs, conspiracy, an abandoned nuclear test facility - oh, there's way more to this story than Puller can initially fathom. But he's the man for this task. You'll keep the pages turning, and you'll keep guessing until the crazy crackerjack finale.

Z for Zero Day and zounds!!!  Thrilling until the end.
Posted by Joanne at 6:00 AM