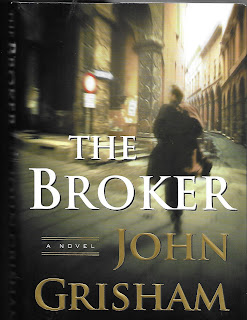 Summer poolside brain - don't want to think too much sometimes. You can count on John Grisham for solid writing, fast moving plot, and some surprise twists along the way. The Broker from 2005 was a bargain book find that's been hanging in my pile. It fulfilled all expectations.

Joel Backman gets a last minute pardon from an idiot president. However, the pardon was pushed by the CIA. Backman, bigtime broker, has secrets that compromise a satellite surveillance system. The CIA is counting on leaking info and seeing who gets to Backman first - Israelis, Russians, Chinese, or Saudis?

Settled in Italy with a new identity, Joel knows he's a target. Now, how's he going to survive? How's he going to be the broker he once was, thriving on power gyrations?

This was a fun read - page turning adventure. And you'll be hungry for Italian food by the end.
Posted by Joanne at 6:00 AM