Book Review - The Other Mrs. Miller by Allison Dickson 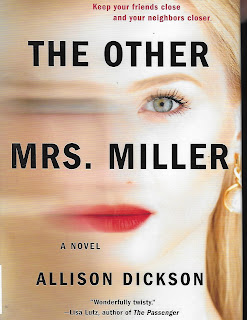 I can't write much here about The Other Mrs. Miller by Allison Dickson.  Can't give too much away.  Suffice to say this book had me fooled with some tricky twists and turns.  It's a page turner. A quick fun weekend read with solid characters and plot line.

cover blurb  Two women are watching each other. Only one knows why.

Phoebe Miller isn't sure when the rusty car started showing up in the cul-de-sac she calls home, or why its driver would be spying on her. What could be interesting about an unhappy housewife who drowns her sorrows in ice cream and wine and barely leaves her home?

Throw a new neighbor family into the mix. Vicki is a gossipy gal.  Jake, college bound, is handsome, hot, and available.  The doctor husband appears to have issues - alcohol, anger, hmm.

Phoebe's super rich father is now in jail. Wyatt, her husband, is dealing with the strain in the marriage.

Oh there's a lot going on in the suburbs.  Who breaks first? Who's the gal in the car?

Some dead bodies on the scene....Yikes!