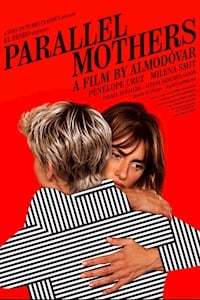 Parallel Mothers directed by Pedro Almodovar has lots of Oscar buzz. It's a product of Spain and I saw it with subtitles. Good to stretch the brain sometimes, and this was an excellent film.

Janis (Penelope Cruz) and Ana (Milena Smit) are thrown together in a maternity ward. Janis is an older unwed mother courtesy of trysts with Arturo (Israel Elejalde), but she is happy with this choice. Ana is very young, scared, and lacking parental support. Her mother's an actress concerned with her career. Her father kicked out due to the pregnancy.

Baby girls are born and both women bond because the babies have some issues and are being held for observations. When released, Janis makes sure Ana has her phone number to stay in touch.

Life goes on, but things get complicated. Arturo questions if the baby is his. Janis begins to question it too. A genetic test opens up more questions. Meanwhile, Janis runs into Ana at a nearby coffee shop. Ana is working there, moved out from her mothers, changed her hair, and there's more news.

I can't say more, except that life does throw curveballs. Excellent acting. Twists to the plot. And just that rich foreign flavor thanks to Cruz and Almodovar.