Book Review - The Matrix - it's a book , not the movie 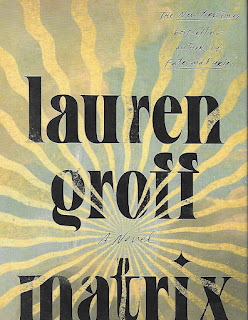 cover blurb:  she rides out of the forest alone, seventeen years old, in the cold march drizzle, marie who comes from France

1158 - a bedraggled Marie, banished from Queen Eleanor's court, is now in England at a much maligned abbey.  Poor, starving nuns. No resources.

Matrix by Lauren Groff is a weird little book with a very old flavor to it. Spare and yet rich - this book is a "defiant and timely exploration of the raw power of female creativity in a corrupted world." (cover blurb)

Marie is an ungainly giantess of her day, no beauty, yet cunning, smart, resourceful. She is strong-willed and soon learns to manipulate what she can to get food, secure the abbey, conquer diseases, and use her faith and visions to instill strength. This book is not long and Groff leaps through the years -covering plagues, blight, and salvation.

p. 117 Without the first matrix (Eve, House of Death), there could be no salvatrix (Mary, House of Life), the greatest matrix of all.

I liked Marie, the various nuns - some cranky, some wily, some mad, and the style of Matrix. I almost felt I should be reading it on dusty old parchment while drinking from a chalice. Kudos to Lauren Groff.