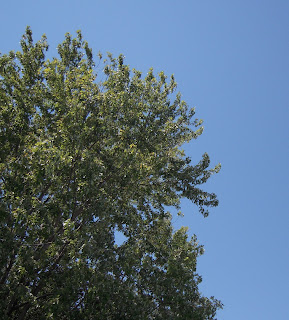 September 11, 2011. It's a quiet Sunday. Blue skies. Ray's settling in for a day of NFL television viewing. His exercise will be running outside to the grill - slow cooking some pork ribs. I've got U.S.Open Tennis Women's Final dvr'd (ten years ago, I'd be taping, now DVR is a verb). He hosted his monthly poker crew last night (and won 3rd place). Today we straightened up, vacuumed, and I just completed our laundry loads. Life at the Faries household - all the "new normal", kinda the same as the old. But is it? 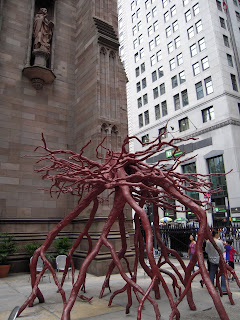 One year ago August, Linda T. and I visited New York City. We enjoyed fabulous weather, yummy meals, superb theater musical, and a visit to the World Trade Center site. This statue is outside of Trinity Church. We had hushed moments, and also were amazed at the hustle bustle energy of new construction. 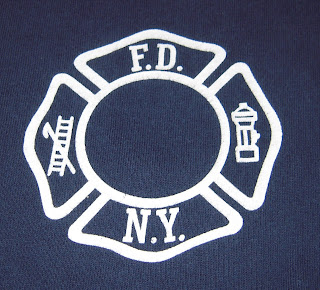 Ten years ago, 2001, Ray and I spent a week enjoying New York City - US Open tennis, Mets, Yankees, bagels, and pizza. We left the city on September 1st. On September 11th, we watched television in horror - the towers coming down, the areas we walked cloaked in smoldering ruin.

My sister visited NYC that October - took the train up from Delaware and enjoyed the hospitality of a city still in shock, but hardy and welcoming and encouraging and friendly. She bought me this FDNY t-shirt, and I'm wearing it today to honor the firefighters, the first responders, the victims, and the survivors.

Ten years later, we still remember and yet so much has happened. Two sons became Marines, did their duty, and are now employed civilians utilizing skills learned from Uncle Sam. I've changed jobs. Ray's changed jobs. Our 401k plummeted this Friday - see nothing has changed.
Ray's grandparents are gone. Other friends and family have passed. Everyone's a little older, a little grayer (and yes, that includes Ray and me). Ten years encompasses so much LIFE. 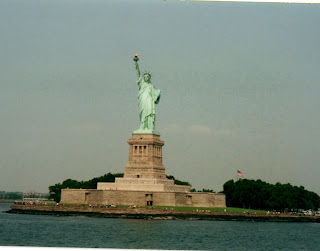 9/11 tributes today and in the future bring tears to the eyes and cheers for America. The Statue of Liberty still stands proud in New York's harbor, sends a message of hope and peace and welcomes huddled masses.

United States of America ... liberty and justice for all.
Posted by Joanne at 12:47 PM