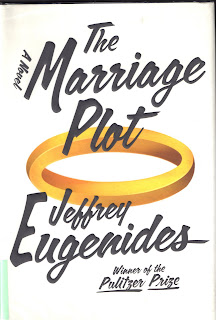 The Marriage Plot by Jeffrey Eugenides won the Pulitzer. Whee!!!!!!!!!!!!!
I was excited to pluck it from the library stacks. Wow - how could it NOT be on a special list...like you had to make an effort to get it? Well........
I admit I had to skim. Boring......at a lot of chapters. I hated most of his characters - they were self-involved jerks.

Here's a paragraph from the jacket: With devastating wit and an abiding understanding of and affection for his characters, Jeffrey Eugenides revives the motivating energies of the Novel, while creating a story so contemporary and fresh that it reads like the intimate journal of our own lives.

I don't think so. Most of the people I know are not dolts like these whiny-ass wieners. The writing is quite good and the general flow of the book is fine. And I understood whatever symbolism existed. Yes, I got the underlying current and the overlying blah-blah. It was all of the stuff in between that did not engage me.

I liked the line on p.136 It was as if the entire city of Paris had agreed to abide by a single understated taste. I could picture what he meant and I liked the understated implication. Good stuff there. There are a lot of rich moments like this as far as description.

However, our "heroine" Madeline is an idiot. Plain and simple, she doesn't make good choices. Maybe that's the point, but it's rather sad. I'd love to hear another person's opinion, besides the Pulitzer Prize committee. Then again, I read awesome reviews, so I'm in the minority.

Go ahead. I dare you to read The Marriage Plot and LOVE it. Please convince me I'm wrong.
Posted by Joanne at 9:58 PM