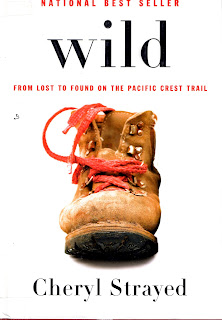 Wild by Cheryl Strayed is a powerful, blazingly honest memoir: the story of an eleven hundred mile solo hike that broke down a young woman reeling from catastrophe - and built her back up again. (cover blurb)

Strayed's lost. Her mother died, she's barely making a living, she drinks too much, and she destroyed her marriage. Twenty-two years old and at rock bottom, she decides to hike the Pacific Great Trail from the Mojave Desert through California, Oregon, and end in Washington State. Against all odds, she forges ahead on a journey that maddened, strengthened, and ultimately healed her. (cover blurb)

Cheryl Strayed does not sugarcoat her life or this trip. She is brutally honest in her writing. Early in the book, I thought maybe she was a bit whiny and I didn't think I'd like her in person. However, she hooked me each step of the way and won me over. Wild is well written with humor and a down-to-earth reality check. You will meet interesting characters along the way, and the Pacific Trail itself is a character in Strayed's memoir.

Chapter 18 - Wet and miserable as it was, the forest was magical - Gothic in its green grandiosity, both luminous and dark, so lavish in its fecundity that it looked surreal, as if I were walking through a fairy tale rather than the actual world.
Join Cheryl Strayed in her Wild trek toward redemption and hope.
Posted by Joanne at 3:00 PM