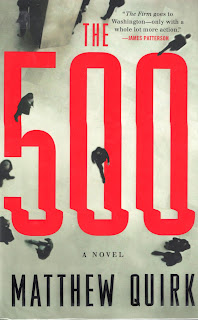 The 500, by Matthew Quick, was a nifty find. Combine political intrigue with heart-pumping action and money, lots of money, and you've got an entertaining read. Like Grisham's The Firm and Turrow's Presumed Innocent, The 500 has smart people doing bad things and twisting laws to make it happen.

Mike Ford, fresh out of Harvard Law School, lands a dream job at the Davies Group - powerful Washington consultants. Mike grew up on the wrong side of the tracks and knows cons when he sees them. At the Davies Group, he's witnessed the biggest power grab of all and must stop it.

He's in and now trying to get out. This could involve things he vowed to never do again - lie, cheat, steal - and this time, maybe even kill. (cover blurb)

The higher the climb, the harder - and deadlier - the fall. Get in on the secrets and root for Mike in The 500. He never had to work more in his life to live.