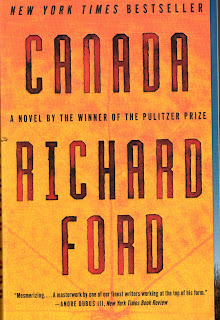 Canada by Richard Ford opens with these lines: First I'll tell you about the robbery our parents committed. Then about the murders, which happened later.


You are hooked and must learn more about the narrator, Dell - age fifteen, his twin sister, Berner, and the parents - the good looking Alabama charmer who married a Polish well-educated immigrant. This book is about choices, family, and the coming of age of a young man.

Normal life is altered when the parents rob a North Dakota bank. The story up to then is one of money and job troubles, of people who love each other, but maybe should never have gotten together. It's the story of Dell who for once hopes to stay anchored in a town, attend high school, join the chess club, and be normal - whatever that word means.

Instead, he finds himself spirited across the Canadian border toward safety and a better life, as planned by his mother. The twin sister flees to California, leaving Dell at a loss. The Saskatchewan prairie proves as harsh and forbidding as Dell's life. He has to learn new skills, figure out his caretaker's story - Arthur Remlinger, self-made man with a past, possibly involving murder. Through it all, Dell's voice guides us. His narration demonstrates his innocence and we root for him to learn to trust himself, his instincts, and to mature without becoming jaded, despite the odds against him.

Ford writes elegant prose, with a quiet humor and a sense of place. I really liked this story and the people bumbling along in life.

p. 358 The next day, Friday, the fourteenth of October, will never seem like anything but the most extraordinary day of my life - for the reason of how it ended.

p. 360 The prelude to very bad things can be ridiculous, but can also be casual and unremarkable.

p.386 When I think of those times....it is all of a piece, like a musical score with movements, or a puzzle, wherein I am seeking to restore and maintain my life in a whole and acceptable state, regardless of the frontiers I've crossed.

Join Dell in his journey from the U.S. to Canada, from being a kid to becoming a man. Canada by Richard Ford will stick with you long after you finish the book.
Posted by Joanne at 5:57 AM