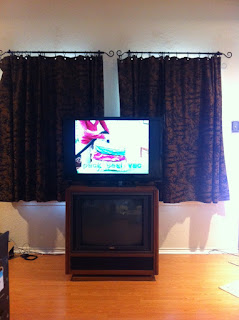 We took this photo as a joke. Yes, the new 39 inch LCD television on top of the over twenty year old RCA console was quite a sight. The new TV is now on a stand.  The poor old RCA was relegated to the curb and ignored. Yep, it was too too old even for free. Of course, unless you have a digital converter box, you couldn't use it. And yes, it cut sports scores off at the top corner. And yes, the picture was old and faded.

But darn it worked. Why did it last so long in our house? Because it was the heaviest sucker in the world. It took Ray and son Chris to haul it out. Then when no one took it, it was an hour of Ray's time to break it apart. Product made more than twenty years ago was solid wood and heavy electronic components with tubes. We couldn't remember the price but it was golden back in its prime. Today's newbie was $329 at Best Buy.

Gotta love the crisp picture, the thin sleek lines, and the remote that works.

More cutting edge stuff - Ray's in Austin (for basketball) not at the cool music scene - SXSW. Gosh I want a t-shirt. And I downloaded a new tune I heard on Songza (fun program like Pandora only no commercials). The song is "I Sold My Bed, But Not My Stereo" by Capital City. Fun tune and catchy idea - indeed, music is my world more than television (Well, except for Downton).

This has been a wacky post, but technology moves quickly and we have to laugh at it sometimes.
Posted by Joanne at 7:22 PM