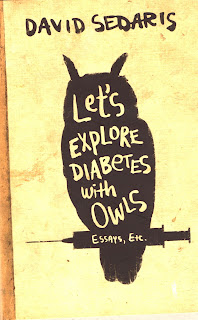 The audience at the Winspear in Dallas ranged from college aged to middle aged fans like myself. My husband is a newbie to Sedaris world, but laughed for the 1-1/2 hours that David presented his material - stories, a poem, just a random thought, and then a deep Q&A. The essays in Let's Explore Diabetes with Owls are not for teen or children reading. There is some "adult" material, and some folks might say "Whoa!". Well, turn the page to another essay and then bust a gut laughing.
Posted by Joanne at 5:01 PM