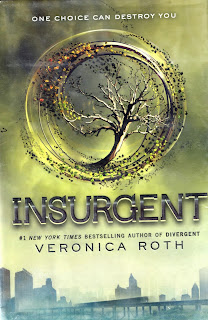 "One choice can transform you or it can destroy you." (cover blurb). Insurgent is the second book of a trilogy and our heroine, Tris Pryor, is fighting for her life and those she loves. War and conflict loom amongst factions and the key to power is the Erudite computers of knowledge. As a Divergent, Tris dances between Dauntless, Erudite, and her home Abnegation upbringing has been strong. She has to be careful because the Erudite want to eradicate the divergent and factionless. Fear of the unknown is powerful.

As Tris, Four, and her friends seek a solution to gain entry to the Erudite fortress, she must count on some folks she didn't trust before. Choices become sacrifices which become loss, burdens, battles, and more choices. At sixteen, Tris grows up a lot. Veronica Roth has written an exciting series with strong characters. This is a fast read and I'm ready for the final book in the series.

"Insurgent is a noun. A person who acts in opposition to the established authority, who is not necessarily regarded as belligerent." p. 458.

Follow Tris into battle, and make wise decisions with her. You will keep the pages of Insurgent turning as the pace quickens. Enjoy.