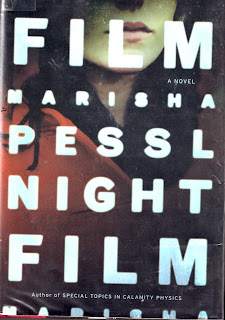 Night Film by Marisha Pessl is a puzzle, an enigma, and you have to keep turning pages to find out what really happened to Ashley Cordorva. She's beautiful, a piano prodigy, daughter of an elusive horror film director and Ashley is dead - an apparent suicide in Manhattan. Investigative journalist Scott McGrath suspects otherwise. As he pursues leads, encounters strange activities and possible cult connections, McGrath is haunted by his memory of Ashley. He's positive he saw her that last night as he took a late run in Central Park. A dark haired girl in a red coat seemed to seek him out on the path.

With the help of two strangers connected to Ashley, Scott seeks clues in the father's disturbing films. Marisha Pessl includes documents that look like newspapers, film blurbs, and excerpts from a frightening website by those obsessed with Cordova. Her writing is enthralling, the suspense is taut, and this thriller suprises until the end. Night Film is a tight read from start to finish.

p. 63 "I ducked through the opening, the rancid smell of garbage overpowering, unseen animals scurrying away as I made my way along the path....As my eyes adjusted to the dark, I could see the crumbling brick exterior, a door to my left. I stepped toward it, tripping on an old bicycle, some plastic bottles, and pulled it open."