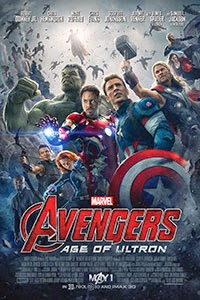 Somehow I never posted this back in the spring. So, it's coming soon to DVD. For anyone who missed it, now's your chance.


Avengers: Age of Ultron is another gem in the Marvel collection. It’s a tad long, but you won’t fall asleep with the barrage of action and noise. It’s just another day for our heroes as they seek Loki’s scepter. Iron Man (Robert Downey Jr), Thor (Chris Hemsworth), Captain America (Chris Evans), Black Widow (Scarlett Johansson), Hulk (Mark Ruffalo), and Hawkeye (Jeremy Renner) fight bad guys, argue with each other, and keep the slick dialogue rolling. In entering a Hydra lair, they uncover a whole new power and it looks like a level of artificial intelligence. This is too good for Stark/Iron Man to pass up as he seeks “peace in our times”. Or not?


Unfortunately the blue pulsing mass of neurons seems to overtake Jarvis, and Ultron is born – a thriving brilliant robot bent on world domination. As voiced by James Spader, it oozes evil panache. The Avengers have to work and think as a group to stay ahead of Ultron’s grab for power. The effects are grand, the battles royale, and our team never looked better. Who’s going to win?  I won’t reveal the answer but I bet you have a good idea.


It’s the little moments that make the movie – the team sitting around trying to pick up Thor’s hammer. Watch Thor’s face when Captain America gives it a nudge. They all have their egos and hidden secrets. Who knew about Hawkeye’s retreat? And what’s up for Hulk and Black Widow – some yearnings? Avengers: Age of Ultron is blockbuster Hollywood movie making at its best.