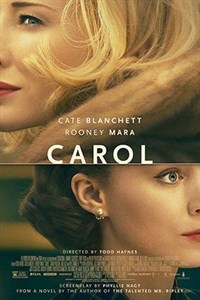 Carol directed by Todd Haynes is a lush period piece set in the 1950s.  The cars are vintage. The sets are stylish. New York City absolutely shines. The stars are stunning.
Cate Blanchett won her Oscar for Blue Jasmine because she dominated the screen.  In Carol she has to share it with Rooney Mara and it’s worth it.  This is a low key artsy flick about forbidden love.
It’s very modest, unassuming, and totally hot.

Carol (Cate Blanchett) is rich, married, a mother, and yet very much on the prowl.  Therese (Rooney Mara) is young and working a Macy’s counter in the 1950s. Cate leaves her gloves. The rest is magic.
This is a complicated tale of a growing fascination and love.  Therese is almost engaged to a young man. Carol is married to the very rich and powerfully conceited Kyle Chandler. How could she resist?  And yet, her college friend (Sarah Paulson) provided complications in the marriage. Now Therese is bait. There’s a road trip where the women bond. It’s all done tastefully and discreetly and yet there’s Carol’s child involved.  Mental health issues. It’s a tough judging world in 1950s and Therese is collateral damage in the fight for love.


Rooney Mara is a gamine Audrey Hepburn. She’s young, beautiful, with huge soulful eyes and a soft manner. Cate Blanchett exudes style and rich knowledge. She’s dangerous and magnetic. What shall win out??  This is a very classically made film with good pacing, beautiful sets, and excellent acting. Nothing blows up, except a few hearts. Both performances are Oscar worthy but shall probably cancel each other out. Carol is just a really nice film, absolutely worth your time and effort.
Posted by Joanne at 6:00 AM