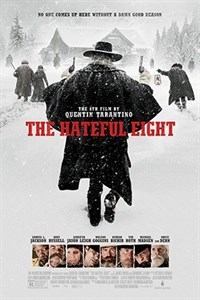 There’s good Tarantino – Pulp Fiction, and there’s bad – Django Unchained comes to mind. Let’s add his latest,  The Hateful Eight,  to the bad list but it could have been so good.  Someone needs to give director Quentin Tarantino a machete to cut this film from three hours to less than two. Someone needs to not be so indulgent with Quentin being so full of himself, and just say, “Get on with the story.”

The opening scenes are gorgeous as we watch a stagecoach in the snow. He also shows what looks like a gnarled tree is actually a stone crucifix – ah, symbolism. In the first hour, we pile a mix of outlaws and lawmen into the coach, only to arrive at Minnie’s Haberdashery in a blizzard, and find another group of suspicious characters. The clock is ticking for a bloodbath. Samuel L. Jackson is a principled bounty hunter given to well proclaimed pronouncements. Kurt Russell is holding onto Jennifer Jason Leigh, an urchin outlaw.  There’s a sheriff, a hangman, cowboy, and a general. There is leftover feelings from the Civil War and banter on racism and bigotry. Too much meandering, too much rambling talk, too many cold characters we don’t care about.

In the final thirty minutes, we find out why everyone is at Minnie’s except Minnie and her husband. Tarantino flashes back to show us the behind the scenes gathering of these vultures. It’s almost like an Agatha Christie game of Clue, only with extreme violence. It’s a shame. The acting is fine. There’s some interesting dialogue. It’s filmed richly and the musical score is grand. But, The Hateful Eight is cold and ugly, devoid of a reason to unspool.