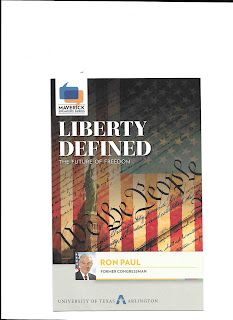 A week ago Tuesday evening, Ray and I headed to The University of Texas at Arlington for another segment of the Maverick Speaker Series. This one presented former Texas Congressman, Ron Paul. In a one hour speech he discussed "Liberty Defined and The Future of Freedom".

Interesting man of conviction. He has been a "consistent spokesman for limited constitutional government, low taxes, free markets, and a return to sound monetary policies based on commodity-backed currency." (from the program blurb)

I have to say he was like a grandfather rock star to the students in attendance. It was an enthusiastic group with plenty of applause for his tag lines. He told the kids they were inheriting a mess, but it could be cleaned up with common sense. He's an advocate of personal liberty and feels that concept has been hijacked from its true form.

In one hour, he could not flesh out major policies. However, he gave salient points to consider and in an ideal world, a lot of it made sense. He talked fast and threw out a lot of history and where things went right and wrong (in his opinion). My head was spinning by the end - I needed more time to ponder a lot of his theories.

Bottom line - the talk made me think, it made Ray and I talk, and I assume students came away with a reason to do some research and dig deeper into America's issues. It was good to get out of the house on a Tuesday night and meet a maverick - Ron Paul.
Posted by Joanne at 6:00 AM