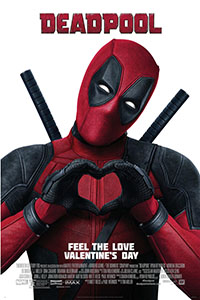 From the opening credits to the final post credit teaser, Deadpool is snarky, spiky, and hilarious.  This is the anti-Marvel super hero who protests, “I’m no hero”. Instead self-mockery has him busting the fourth wall. He turns and talks to his audience, lets us in on the joke. Ryan Reynolds has finally received the perfect role. He can show off those abs as he’s tossing a Sexiest Man Alive magazine. He voices a smirk with every line and we eat it up. This is a perfect date movie – action, crazy violence, and Reynold’s butt. Deadpool is very, very R – do not bring your children.

Director Tim Miller keeps things hopping. We meet Deadpool as he’s shooting up some bad guys. Flashback to Wade Wilson, a slick mercenary diagnosed with cancer. He’s got the perfect girlfriend, Vanessa (lovely and smart Morena Baccarin) – a montage of their “fun” together is a highlight reel of HOT holidays. Trust me. Wade turns to evil Ajax (Francis played by Ed Skrein) to cure his cancer, but alas he is turned into a mangled face cancer-free mutant. Wade dons his red spandex, becomes Deadpool and seeks revenge for losing his face and (perhaps?) his girl (his choice).

The whole time he’s shooting or sword slashing, he’s mouthing commentary – lots of culture references along with a Hugh Jackman/Wolverine salute. It’s all in good fun. I keep using that word because this movie does not take itself seriously. It’s truly crazy amusing, fast paced, nutso entertainment.

February (or any month you see it) just got FUN.