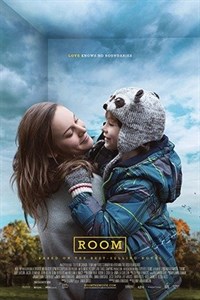 Room is absolutely Oscar caliber. Wow. The book was excellent and now the movie brings it to the screen. The author adapted the screenplay and that bodes well for quality Wow – I am still blown away.
The premise – a young girl (age 17) is abducted and stuck in a garden shed that’s on lock down. She bears a baby from her kidnapper and we first meet them both in “room”. He’s turning five and she’s twenty-four. Brie Larson (Joy) deserves an Oscar hands down. Jacob Tremblay (Jack) deserved a nomination.  The performances are touching, nuanced, and amazing.

She’s raised this boy without the “father” seeing him or being involved. She puts up with Old Nick’s visits and forced sex.(The boy goes to the closet).  She only has a skylight and television to remember the outside world and freedom. Now that Jack turns five she knows he is her link – her chance for them to escape. She has to explain concepts of the real world. At first he doesn’t grasp it, but then thinks things through. He’s reading Alice in Wonderland and she equates some of the concepts.  She works up an escape plan (I won’t give away details). And it works (this is not a huge reveal) but has consequences.

The second part of the movie is about re-adaptation to the real world for her, and new adaptation to a whole new world for Jack. Who does better?  I’m sure you can guess but the journey is fascinating and well done. Joan Allen as Joy’s mom is always excellent. She thought she lost her daughter and now she’s back. There are lawyers, media,  etc to deal with. The world has moved on while Joy was stuck in the “room”.  For Jack, that was his “world”.

Room is touching and gives one perspective. I can’t emphasize enough how well acted this movie is. You feel for Joy. And Jack is a revelation. ..he’s a newborn at age five.  Wow. I keep saying Wow. Trust me – join me in saying Wow! It’s a tough subject and yet (I’ll give this away) it ends well. There’s hope for all.