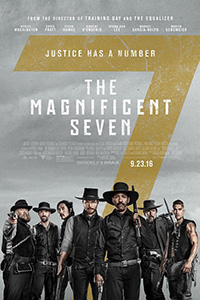 Yes, 1960 had Yul Brynner, Steve McQueen and Charles Bronson headlining a western. That was a long time ago and you can watch it on any classic movie channel. But there’s nothing wrong with rounding up a new herd of actors and bringing The Magnificent Seven to the big screen again. Director Antoine Fuqua lends a sweeping touch to glorious scenery. He throws a ton of firepower, stunt shooting, and riding, and oh no – a Gatling gun to the showdown. He gives each man a solid role, sharp dialogue, and a chance to squint into the sun as he reflects on his fate.

Denzel Washington lends the gravitas necessary for Sam Chisolm, the bounty hunter. Ethan Hawke is a twitchy former Confederate soldier. Chris Pratt is the slick cardsharp gunslinger, and Vincent D’Onofrio is the grizzled coot. Byung-hun Lee, Manuel Garcia-Rulfo, and Martin Sensmeier fill in the final seven. I read somewhere that it’s the United Benetton Western.  Peter Sarsgaard is the slimy villain who owns the mine and wants to run roughshod over the neighboring town and steal all of the land. Boo hiss

The seven choose to tilt against windmills and fight for the little guy. They help the townsfolk with their pitchforks and rifles and vow to save the women and children. It’s a noble fight and entertaining. The Magnificent Seven won’t be considered a classic, but it’s a popcorn worthy movie. Round ‘em up and head to the theater.
Posted by Joanne at 6:00 AM