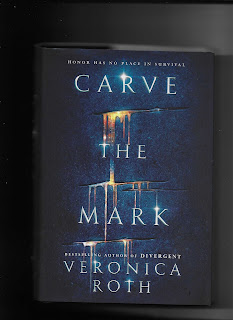 From the author of the Divergent Series, Veronica Roth, we have a new YA trilogy to explore. Carve the Mark introduces us to a galaxy powered by the current, and everyone has  a gift.  Cyra is the sister of the brutal Shotet ruler. Cyra’s gift gives her pain and power – she is used by her brother to inflict torture, but she can also absorb others pain and that proves useful. She’s smart, resilient, and eager to destroy her brother.

Akos is from frozen Thuvhe. He’s generous and a fighter who’s captured by Shotet soldiers. He will do anything to get his brother out alive. In meeting Cyra, he learns about her world. Cover blurb – Will they help each other to survive, or will they destroy one another? Carve the Mark is Veronica Roth’s stunning portrayal of the power of friendship – and love – in a galaxy filled with unexpected gifts.

I was a tad stunned as I navigated this book. I had trouble keeping track of all the weird names, gifts, and trying to figure out who hated whom and why. Maybe someone was dead based on history, but then they’d pop up on another planet. There were good moments in this book, but I found it rather confusing and a bit repetitive. They’d fly here and fight. Then fly here and fight. And then we’d talk about what we want to do, and scurry around a ship to evade, then invade, and then….WTF.  I’d be interested to know if anyone who likes future/fantasy world stuff enjoyed this book. Am I missing something? I liked Divergent a lot and read the series quickly.

Carve the Mark by Veronica Roth did not make its mark on me. I doubt I’m up for two more…