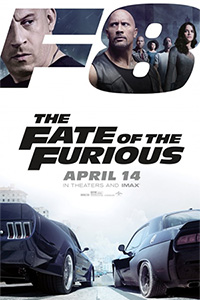 Fate of the Furious is the eight installment of the Fate car chase franchise. What the heck – we know what we are going to get. And we love it.  This movie is still in theaters (yes, this review is a tad late), but it’s fun to see on the big screen. I am a huge Vin Diesel fan and he does not disappoint. With a voice that sounds like a motor growling, he’s a surprise. Did Vin turn on the family group and join Charlize Theron (a sultry smart villain) in her plot to take over the world?  Say it ain’t so.

I won’t give it away.  But the gang works hard to figure out what the heck is going on, as a nuclear sub could be captured and used for evil.  Fast cars, fast computer connections, and a lot about family. That’s the key to the Fate story line. Oh yes – we have Dwayne (The Rock) Johnson using his Mojo to thwart evil. Kurt Russell, Tyrese, Ludacris, Michelle Rodriguez, and more. The gang is gathered and ready to drive

This is just fun over the top crazy and worth seeing on the big screen  Spring for the big tub of popcorn and zoom along for the stunts, the quips, and of course – the cars.