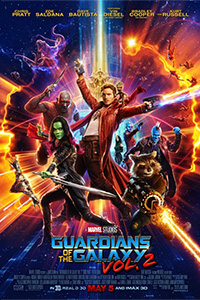 Guardians of the Galaxy 1 was so refreshing and fun.  It’s tough to beat. Thus Guardians 2 is a bit much – plenty of excess, but still extra good hilarity and worth seeing in the theater. I am Groot, now with baby Groot (voice by Vin Diesel) is still an awesome tag line, no matter the dialogue.  Lots of plots, tons of action, and of course, the Star Lord (Peter Quill) himself, Chris Pratt, is ever more confident and handsome and cool as our leading man.  Zoe Zaldana’s Gamora returns as well as Rocket the raccoon (Bradley Cooper). She provides the hot, smart, and sexy. He’s our master of quips and irreverence.

Kurt Russell appears as Ego, Quill’s father. He’s a hoot – self-absorbed villain with a grand scheme to take over the world with his DNA. His wild planet is a feast for the eyes. There are plenty more plot lines and then teasers as the Guardians will fit into future Avenger story lines. Sly Stallone appears as a space thief. There’s a woman in gold who’s out to take over the world but is foiled by the Guardians for now. Teaser after teaser appears and it’s hard to keep track (I thought) of who is who.  But it’s still a bit tongue in cheek and raucous.  You won’t be bored or check your watch.

Big thumbs up. Pay for the big screen experience. Treat yourself to some popcorn and stay and stay and stay until the lights come up.  Groot as a teenager is a plus moment at the end.  Guardians of the Galaxy Part 2 has a great soundtrack and kicks off our summer cinema season.  Just have a blast.  We are all Groot.
Posted by Joanne at 6:00 AM