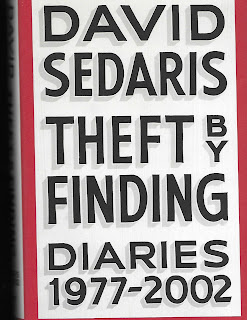 Theft By Finding by David Sedaris is a treasure trove from his diaries 1977 – 2002.  This is book one.  I now eagerly await the release of 20023 to 2017.  Meanwhile I may go back and meander through this book again.  I’ve enjoyed Sedaris’s writing since The Santaland Diaries – his short story about his time as a Macy elf. It is freakin’ hysterical. The descriptions, the humor…I laughed out loud as I read that .  That was also his huge breakthrough. He read it out loud on NPR and got a huge response. Suddenly, everyone wanted his essays. He wrote about his wacky family, his upbringing in the South, his being a fish out of water, and just his droll wit on every day  occurrences is read-worthy.

Cover blurb: In his diaries, he’s recorded everything that has captured his attention – overheard comments, salacious gossip, soap opera plot twists, secret confided by strangers. These observations are source code for his finest work, and through them he has honed his cunning, surprising sentences.

p. 242  September 25, 1990  Dad doesn’t pay attention when you talk to him, so Paul’s taken to throwing the term IRS into his sentences. Then it’s suddenly, “Hold on a second, what did you say?”

p. 255  February 5, 1991  Elaine called last night with a possible job. (work for a small press as a personal assistant)  I think it involves typing, which might be a problem.  We’ll see.

He’s quirky and unique. Theft by Finding offers a glimpse into an American humor author who’s gifted with a keen eye and a sharp pen. Sedaris also goes deep in regards to the death of his dear mother (quite a character herself and a huge influence on David), and also his troubled sister Tiffany. His writing is not all laughs. He addresses his addictions and obsessions too. These are diary entries and he does not edit out the bad and just keep the good. This is a peek into a life and you see his growth as an author with each entry. Oh, David Sedaris is different and you have to “get” his humor, but it’s worth the journey and laughs.