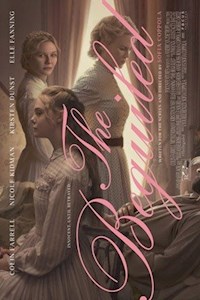 The Beguiled opens in 1864 Virginia. It’s a hot steamy day as a young girl combs the woods for mushrooms. She comes across a wounded Union soldier and helps him back to the Seminary Girls home and school where a few young ladies remain. The headmistress (Nicole Kidman) helps clean his wound and sew him up. She chooses to not put out the blue scarf as a signal to the local Confederate patrols. Instead she agrees to protect him as he heals. And so the tension begins.

The soldier (played by a charming Colin Farrell) has his smooth Irish brogue working for him as he verbally seduces each female – girls from age 10 up to the older teen (a hot stifled Elle Fanning) to a yearning for a man’s touch young woman (a repressed but lovely Kirsten Dunst). And the headmistress herself is not immune to his charms. Each female in the house slowly feels she is “special” in his eyes and they vie for attention. Whether it’s dinner where they all dress up, play music, sing, and flirt. Or if they come into his room to “check on him”.

Tension mounts and this movie is a slow burn. Each moment hints at danger, and in the distance musket shots echo. Director Sofia Coppola has an eye for filming a pretty picture, each southern tableau dripping with moss and sexual heat. Jealousy builds and then erupts. Then all hell breaks loose in the house. Let’s just say this does not bode well for the one man in the pit with circling cats. I won’t say more. The Beguiled is a mood movie. It’s a slow pace build to quite a finale.  Excellent acting and storytelling. When do you wave the blue scarf?
Posted by Joanne at 6:00 AM