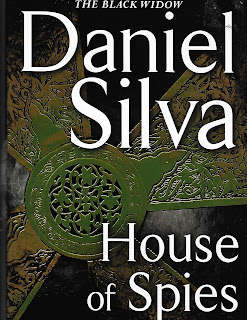 Count on Daniel Silva to raise the summer alert to must read suspense thriller. House of Spies is his latest with our favorite reluctant hero, Gabriel Allon.  From the cover blurb – Allon is back and out for revenge, determined to hunt down the world’s most dangerous terrorist, a shadowy ISIS mastermind known only as Saladin.  There’s a trail of carnage in London’s West End. The attack is brilliant except for one loose thread: the French-Moroccan street criminal and ISIS operative who supplied the combat assault rifles.

Threads lead Allon and his team to Jean Luc Martel. From Saint-Tropez to Casablanca, a trail of money and connections are pieced together. Roles are played. British, American, and Israeli forces work together to fight the global war on terror. Our favorite heroine from the previous book, The Black Widow, is back. Altogether, Gabriel is the skilled hand with the vision to take the time to do it right.

From the cover blurb: House of Spies is more than just riveting entertainment: it is a dazzling tale of avarice and redemption, set against the backdrop of our times.

Daniel Silva obviously does his research. He has an awesome character with Allon and I enjoy our battle tested Israeli leader, art restorer, calm influence, and concerned world citizen. Good writing, interesting world settings, and well-paced tension will keep you turning pages. Silva has another winner.