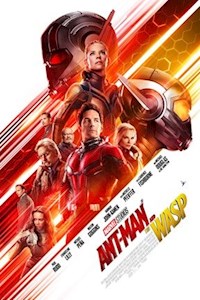 Ant Man and the Wasp is just goofy fun. It seems like Marvel-lite, just a bonus of a Marvel hero/duo.  Paul Rudd just gets better as he ages. He still looks so boyish and projects amusement. His patter alone is worth the movie. Evangeline Lilly as Wasp can kick butt and FLY!  He even protests, “Hey, Wings? Seriously?”  And I love Michael Pena as Luis – Ant Man’s work partner in his “real” time security company job.  Pena is awesome in serious movies, but he obviously has a sense of humor and enjoys letting his freak flag fly. Some of his lines are laugh out loud funny.

I can’t begin to discuss plot. Let’s just say the word “quantum” is used a lot. Somehow, Wasp’s mother (Michelle Pfeiffer) is still floating in the quantum tunnel. Is she still alive? Hmmm…….
Wasp’s father (Michael Douglas) has been working on a way to get her back. Meanwhile, there’s some poor creature (the ghost) who is between worlds and needs the tunnel to go suck energy from Michelle. Samuel L. Jackson has been helping her. So there is a scientist war going on, a quantum war, and a whole lot of other people trying to get Douglas’s lab.  I won’t go further, and frankly just don’t ask too many questions.  This movie is just sheer movie-making effects, fun, patter, and summer don’t use your brain too much kind of movie.

The acting is fine, the effects are good – small and tiny. Paul Rudd carries the amusement and I give him props. This is a big tub of popcorn and a vat of soda worthy flick. Just laugh and go with it. Stay for the two extras at the end. What the heck! Support the Ant-Man and Wasp