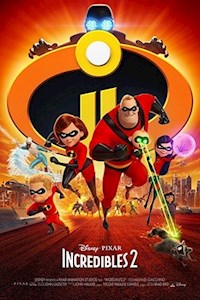 I am very behind on movies - cannot keep up with Alex Cavanaugh. But here I am with a review. Better late than never.

It took a long time but it was worth the wait – Incredibles 2 has that Pixar magic. Animation, story line, voices, and energy make for a very entertaining two hours for young and old alike.  When we last left the family, super heroes have been banned. So Mr. Incredible (Craig T. Nelson) has slogged in the insurance world, and Elastigirl (Holly Hunter) has stayed home with the kids – Violet (Sarah Vowell), Dash (Huck Milner), and baby Jack-Jack. But trouble is brewing and a very rich entrepreneur Winston D.(Bob Odenkirk – yes, doing his Better Call Saul kind of voice) wants to make super heroes cool and necessary again.

So he wants to promote Elastigirl. After much discussion, Mr. Incredible is home with the kids – oh, that gives some funny scenes. He’s exhausted with Violet teen angst, kid’s New math (Dash), and Jack-Jack exploding into his super powers. The kid can vanish and go through walls, he can become a demon and burst into flames, and he can duplicate into many. Yikes. The dad has his hands full and tries to make it sound like it’s under control.  Meanwhile, through some careful organized saves, Elastigirl is proving woman power, super hero power, and is becoming a legend.

However, a very evil villain – the Screenslaver- threatens the whole atmosphere.  I won’t give anything else away.  Let’s just say that Mr. Incredible gets to don those tights again. Frozone (Samuel L. Jackson) totally does his thing. Other super heroes contribute, go bad, and then recover.  The kids are older and more valuable and skilled. And Jack-Jack is tremendous. Plus you have Edna (voiced by the director Brad Bird) in a great sequence – she chooses to babysit Jack and design his little baby super hero outfit. It’s genius!

So much fun is packed into this film. Lots of laughs and you care about these animated characters.  It’s worth the wait.  Classy project, animation, and the pre-movie little animated flick Bao is rather poignant.
Get that tub of popcorn, buy those sodas, and spring for a really fun family outing. They are Incredible….2