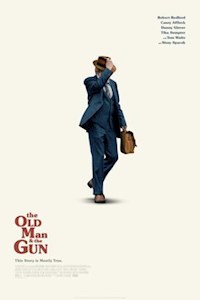 The Old Man and his Gun is a charming movie based on a true story. Forest Tucker liked to rob banks. He was good at it, too, until he got caught and then he was pretty good at escaping prison (including building his own boat and sailing out of San Quentin island). But that’s back story. 1981, We meet Forest (played by the excellent Robert Redford) as a dapper dressed, polite older gentleman robbing banks in Texas, Arkansas, and beyond. He appears elusive until John Hunt (Casey Affleck), a Dallas cop, digs deep to pursue the man. It’s a cat and mouse game, and really fun to watch.

Meanwhile, Forest meets Jewel (the sublime Sissy Spacek). He says he robs banks, but she doesn’t believe him. They meet at a diner when he’s in town, and ultimately spend time chatting and sitting on her lovely ranch front porch. Oh he spins quite a few stories, says only married once a long time ago with no kids. Says he’s a salesman. No matter what, he speaks with a twinkle in his eye and a thoughtful manner. Their screen time together is so pleasant.

So, in ninety minutes you get to meet the bank robber, his buddies (dubbed by the news as The Over the Hill Gang), his lady friend, and the cop. You get the build-up, the behind the scenes planning, the cop figuring out the puzzle, and you root for everyone concerned. Yes, the old man has a gun, but this is not a violent movie. So, sit back, enjoy the ride, watch a masterclass in acting, and enjoy the dialogue and the silence too.  The Old Man and his Gun is quite a true story- you just can’t make this stuff up.