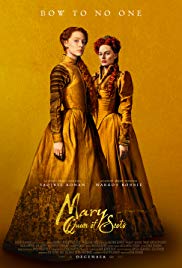 Scotland 1500s - Mary Stuart arrives back in Scotland to reclaim the throne from her half-brother. She's Catholic, been exiled in France, and now she's striding the moors - young, smart, strong-willed, and ready to rule.

Aye, but her cousin Elizabeth I in England is not thrilled with this power move. On both sides, the privy councils question the politics, powers, religion, and battle of two women. Who will marry? Who can produce an heir?  And nobody wants to bow to the Pope, have a Papist on a throne.

Saoirse Ronan as Mary Stuart is worthy of her Oscar nomination. She is mesmerizing on screen.
Margot Robbie as Elizabeth I is formidable.  The balance of the cast adds depth to the film.

The costumes, scenery, cinematography, story line, and drama are excellent in Mary Queen of Scots.
This is a strong period piece film with plenty of court intrigue, power struggles, sex, violence, and conniving, bowing, and scraping.

Who shall wear the crown?