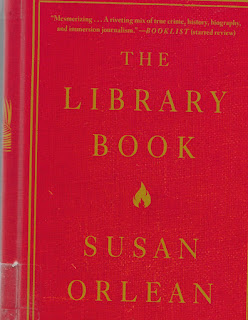 The Library Book by Susan Orlean is another well written non-fiction book by a talented writer. Just from a tidbit of an old news clipping, she became interested in the 1986 catastrophic library fire in Los Angeles. It occurred the same day as the Chernobyl nuclear meltdown in Russia. Thus it did not make the news headlines. However, after seven hours, 400,000 books were consumed and 700,000  were damaged. Collections, rare manuscripts, and other print pieces were destroyed.

Orlean  introduces us to an engaging cast of employees and patrons, delves into the evolution of libraries, reflects upon her childhood experiences in libraries, and scrutinizes the man long suspected of setting the fire. (cover blurb)

The Library Book reads like a mystery. Orlean deftly sets the stage, gives us history, weaves in personal stories, and shows the importance of libraries in the community. A full chapter discusses the issue of homelessness and how the Los Angeles library handles a growing social problem. It’s rather mind-boggling. Libraries today are more than a repository of books. They offers tech support and computer usage to many, they engage kids in various programs like a Dr. Seuss festival and more, classes are taught, and  book clubs meet. The library tends to be a place where all can feel welcome. And libraries are often incredibly underfunded.

This book (which I did get out of the library) is not dry. It’s an engaging, entertainment read.  Visit your local library and be surprised. Check it out!