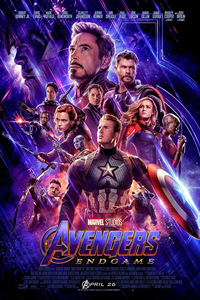 Based on the box office totals that have racked up to billions, Ray and I might be the last people on the planet to finally see  Avengers:Endgame.  But rainy Saturday morning kept us from yard work. Thank goodness - movie magic time.

Three hours - I thought it went by quickly. Everybody and their uncle from the Marvel universe showed up. Story lines were explored and tied up fairly neatly. Some live,  some die - that's life.
The word quantum is used and you know it's tricky when there's a time travel continuum theory bandied about.

Ironman and Captain America do stand toe to toe and argue. Well, Ironman does have to look up a bit. Chris Evans does have America's butt...hey,  the movie says so.

There are tears, there are battles,  there's humor. It's all there. Marvel knows how to package its product - the film is rich in characters,  dialogue, action,  and drama. I'm giving a review but no spoilers, just in case someone has been under a rock and missed this in the theater.  And do see it on the big,big screen - it is glorious.

P.S. I still love Thor, no matter what.  Chris Hemsworth rocks!
Posted by Joanne at 6:00 AM