Monday Moment Book Review - Us Against You by Fredrik Backman 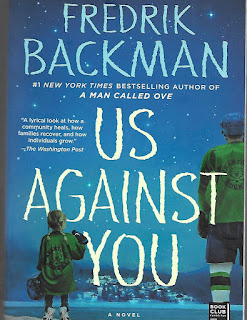 Frederick Backman writes well about human foibles, character, and spirit. He has another winner with Us Against You and small town hockey rivals. The book is deeper than the rivalry between Beartown and Hed. It's about a high school girl who's been raped - sides are taken in regards to her and the hockey star who did it. And then what about other discoveries - what if a star on a team is seen kissing another male? What sides are taken there?

Back blurb - With immense compassion and insight, Frederik Backman reveals how loyalty, friendship, and kindness can carry a town through its most challenging days.

p. 5 Girls talking about being born male or female  "I'd be a boy. Because the world is kind of shitty toward them sometimes. But it is crappy toward us nearly all the time."

Later - We only pretend hockey is complicated but it isn't really. When you strip away all of the nonsense surrounding it, the game is simple: everyone gets a stick; there are two nets, two teams. Us against you.

I enjoyed this deep exploration of two small towns. There are rich characters and a lot of drama against the backdrop of hard working, struggling folks, who need a "win".  Beartown itself is a character - sleepy, small town, innocuous - but political infighting and drama on a large scale level. Lots of living, drinking, fighting - all surrounding the love of ice.

You don't have to know a thing about hockey to enjoy this book. You need to think you know people.

Labels: book review, Fredrik Backman, monday moments, Us Against You