Book Review - Beneath a Scarlet Sky by Mark Sullivan 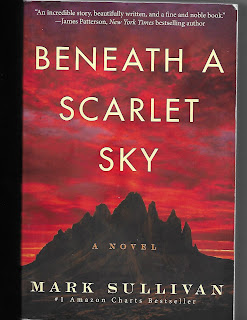 Cover blurb that captures attention - In World War II Italy, Love Was Worth Spying For

Beneath a Scarlet Sky by Mark Sullivan is a fictionalized version of a young man's true story from WWII Italy.  There are far more tales of Germany, Poland, and France. But Italy had some incredible dark hours and Pino Lella was a teenage in love who had no skin in the game until he DID.  He joined an underground railroad helping Jews escape over the Alps.

Then, after enlisting as a German soldier, Pino ended up as the driver for General Hans Leyers - a right hand man to Hitler. As a spy for the Allies, inside the High Command, Pino holds a lot of responsibility. Yet, he's still a teen in love.  The author captures all of the emotions of a teen in flux with the backdrop of war and the pressures involved.  We see Pino grow into a man, endure the horrors of war, be involved in death, and fight to live.

This is a page turning saga and amazing that it's based on a real man. The author did his research, met and talked with Pino Lella, and captured a time and place in history that will live forever.  Well done!