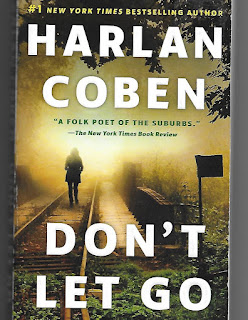 I shuffled through various books a friend swapped with me. I needed a no-brainer entertaining read. Harlan Coben is a reliable writer and Don't Let Go filled the bill. Fast paced, this book churns with action and emotion. Coben fleshes out his characters and hasn't become a lazy writer. He still explores secrets, lies, and maintains suspense.

cover blurb - For fifteen years, Nap has been searching  for Maura and for the real reason behind his brother's death.

Fingerprints, an abandoned military base, childhood friends and a secret group. Nap embarks on a quest for answers - far more sinister than he dared imagine.

I didn't let go of this book until I zoomed to the end and was surprised by the twists and turns. Thumbs up, good read.