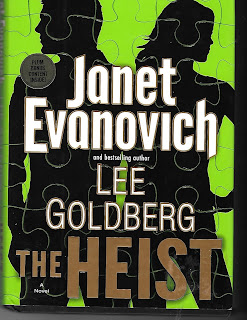 I love Janet Evanovich's Stephanie Plum series. They are just fluffy.  Here she joins forces with Lee Goldberg for a fun romp with an FBI agent, Kate O'Hare and a heartless con artist, Nick Fox. She's been chasing him forever. Now, she got him. What to do with him?

Work together? Say what?

In The Heist, this improbable team are after a corrupt investment banker who's been hiding on a private island in Indonesia.  cover blurb - He tests O'Hare's patience and Fox's skill. Not to mention the skills of their ragtag team made up of flamboyant actors, wanted wheelmen, and Kate's dad. High speed chases, pirates, and Toblerone bars are all in a day's work...if O'Hare and Fox don't kill each other first.

p. 218  What we are doing is more like a heist, only with a person instead of an object. A successful heist is one that nobody notices until it's over and the thieves are gone.

One blink and you might miss a trick. Or the sparks that fly (of course) between Kate and Nick. Were you expecting less...heck no.

This book is just stupid fun and you can fly through it - total no-brainer and that's a good thing sometimes.

Let The Heist steal your brain for a nanosecond.