Clive Cussler Discussed, But Did Not Cuss 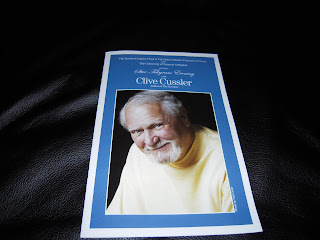 Another great author night at Bass Hall in Fort Worth. Thanks to the Star-Telegram, various Trusts, and UT-Arlington for continuing to sponsor fun free events. (Parking is free too - hooray for Fort Worth).

Internationally renowned author, Clive Cussler, was delightful as he discussed his new book The Wrecker, his many other series, his most famous character Dirk Pitt, and writing in general. He came from an advertising background and decided to try his hand at writing a book. He read avidly and basically studied genres he admired - i.e. action/thriller. He chose one word names for his character (like a James Bond) so it would be easy to type and he was off and running.

He did comment that he and Dirk were both age 36 when he began. Clive's now 78, but Dirk is only 45. Said that wasn't quite fair. I'd say Mr. Cussler is keeping up pretty well. Looking dapper, he's working on approximately four books in various stages; he's pursuing a shipwreck; and he still has over one hundred cars in his collection.

The man has a twinkle in his eye and many a tale to tell. He said he considers himself an entertainer. I'd say he's certainly succeeded.
Posted by Joanne at 5:03 PM