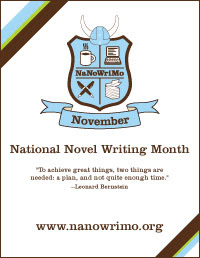 It's been a week and I've stayed on task. Actually I'm ahead with 13,772 words to my novel. I've decided the working title is First Jump. I checked Amazon and that exact title did not exist.
I've learned a lot since last year's NaNo Experience. I have less characters to keep on the move. Last year I was afraid to not have enough action or drama for the month and so I had the story stuffed with too much. I lost track of and interest in some of the people. I dragged them along, but they were dead weight.
This year, I have Dylan, a family of four (that includes the "evil" (at least in Allie's mind) stepmother), and a young couple - Jay and Summer. They were all at the arboretum on that fateful August day for Julie Lin, age two. She's currently floating face down in the lily pond.
Back story time - April/May: Poor Dylan can't catch a dating break. He's bumbling about and certainly doesn't seem capable of saving the child. Jay and Summer just broke up in Ft.Worth. What happened and how will they get together again by August to be at the arboretum discussing wedding plans?
And Allie - my artistic Goth teen who keeps rolling her eyes and sighing at Terri, the stepmom. She has spunk. She's feisty. She's popped into Dylan's storyline and also was at the Ft.Worth water gardens when Jay and Summer strolled by.
It's almost time for her April/May story. I've got lots of words to type and character flaws to expose.
Who are you rooting for to save Julie? Who will jump first?
Posted by Joanne at 6:02 PM