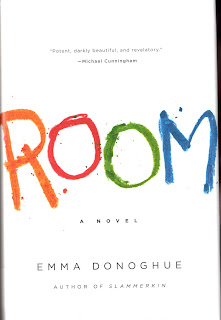 Jack's five-year-old voice leaps from the page and captivates you in the novel Room by Emma Donoghue. To him, Room is the only place he's ever known. It is filled with all that's necessary for his imaginative, energetic life and the key is Ma. However, Room is her prison. She was kidnapped at age nineteen and now at twenty-six, she's wearying of maintaining a calm facade for Jack.

She tries to explain that there is a real world beyond their four walls. But how do you explain reality? And what happens when you re-enter the world after disappearing for seven years? Plus there's Jack, a product of her captivity. He's an innocent boy, with no concept of friends, social boundaries, nature, and family.

Ms.Donoghue brilliantly captures two lives in two different situations. First there's Room, where it's Ma and Jack and their routine, interrupted only by their captor, a creepy entity. We deal with him while hidden in the wardrobe with Jack.

Second, there's the world upon escape - the hospital, necessary for health assessments and re-adjustments. For example, Jack's never walked down stairs, he's never been in the sun, his eyes have to learn distance sight and perspective.

Dealing with lawyers, family, and the media proves stressful for Ma. And for Jack, he doesn't understand that it can't just be him and Ma anymore. He has to share her and become his own person. Jack's observations offer keen insight into our crazy world. I liked this paragraph on
p. 286:
In the world I notice persons are nearly always stressed and have no time. In Room me and Ma had time for everything. I guess the time gets spread very thin like butter over all the world, the roads and houses and playgrounds and stores, so there's only a little smear of time on each place, then everyone has to hurry on to the next bit.

Room is different in a good way. Ms.Donoghue has strongly fleshed out characters, a unique perspective in her main character, Jack, and gives her reader a lot to think about.

You'll look at your own space and world in a new way after reading this book.