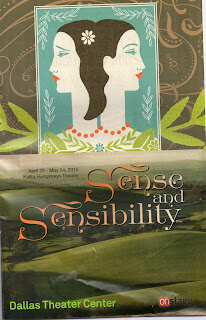 Jane Austen's Sense and Sensibility as adapted by Kate Hamill for the Dallas Theater Center, proved to be an outstanding production. We first hear and see the town gossips - such a shame about the Dashwoods. Poor Mr. Dashwood died so suddenly and now his widow and her girls must move.

1790s in Devonshire, England is not so different today. Jane Austen, beloved author, wrote of timeless subjects. We see Elinor Dashwood, the eldest sister, try to maintain proper decorum while falling in love with Edward Ferrars.

Elinor has to rein in her sister Marianne, the impetuous soul who fights the social mores of the day. She falls for the dashing John Willoughby, while the stolid Colonel Brandon courts her. But Willoughby is a playboy and scoundrel. Edward is engaged to another. The Dashwood girls have no money to bring to the table. Oh, it's all so difficult. Thank goodness they did not have Facebook and other social media to exacerbate the muddle.

The Dallas Theater Center's simple staging and strong acting carried the day. This was a rich well done play, and Jane Austen ruled over it with her words.

It is not what we think or feel that makes us who we are. It is what we do. Or fail to do....
Sense and Sensibility by Jane Austen