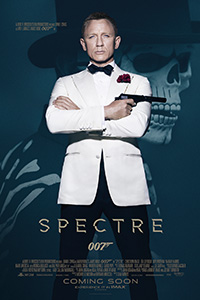 Spectre is the latest James Bond movie and it does all the usual Bond stuff. In the overall scheme of movies, it gets a solid B for entertainment. However, I’m going to be picky in this review, and give it a C.  The last Bond movie, Skyfall, was truly a great movie – it had mystery, drama, action, and many holy cow! moments.  Compared to it, Spectre is a yawner and that’s a shame.  The rumor has floated for a while that Daniel Craig is ready to move on from the franchise. Frankly I think it shows. He’s still a decent actor and did the James Bond thing, but he lacked that extra sparkle, pizzazz, edgy humorous smile, and verve.

Cars – well, heck yeah – the Aston Martin gets an A+. No question
Opening credits – always Bondesque and these were good
Bond Theme sung by Sam Smith “Writing on the Wall” – heck yeah – the kid has a voice and this is a worthy song – A
Shaken not stirred reference – check
Bond Girl – pretty enough and yet a tad bland. Frankly, too too young. She had a pretty pout and could run in heels, but was not a standout
Opening chase scene and blast in Mexico City – very good opener. Well filmed and dramatic.
Balance of plot line about the Spectre organization and blah blah blah blah – rather boring
The new Q – this is a bright spot – the kid does a good job and injects some humor into the movie. The gadgets are okay. Back in the “olden” days, they were crazier. Technology now is almost ahead of Bond movies.
Moneypenny – attractive, but didn’t get to do much in this film. Generally her give and take with James adds something. Unfortunately, it must have been left on the cutting room floor.
Missing desperately – Dame Judi Dench as M. Yes, she left us in Skyfall and she’s sorely missed. Her crisp diction and toughness with James gave him some soul. Her scenes always crackled.  Ralph Fiennes is adequate.
Villain – Christoph Waltz – alas. He did his best with the part, but Javier Bardem set a high bar in Skyfall. Sorry – Christoph – just not wacko enough.

Are you seeing the theme? Skyfall truly added to the James Bond lexicon. Spectre is very pale in comparison.  I admit I saw this movie right after the Paris bombing tragedy and frankly it set a pall over the movie. I was sensitive as to the violence, the explosions, etc.  What used to be so “crazy” in the Bond films is now unfortunately on the evening news. I had high expectations, but had to settle for mediocre. As for the car………..oh yeah, still awesome.