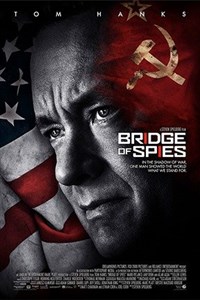 Bridge of Spies is an excellent film. It's a winning combination - director Stephen Spielberg and actor Tom Hanks. Both are at the top of their game in this Cold War telling of a story based on true events. It's 1957 and both the US and the Soviet Union have spies on both sides of the ocean. One man, Rudolph Abel, is caught in Brooklyn and tried for espionage. Tom Hanks, an insurance lawyer, is called upon to defend him. Ultimately, Hanks as Jim Donovan, seeks a fair trial for this man who's being railroaded toward the death penalty. The judge already has him convicted, as do American citizens.

Abel neither confirms nor denies his innocence or guilt. Acted with subtle grace by Mark Rylance, he appears to accept his fate and trusts Donovan. The two grow to respect each other. One point Donovan makes to the judge is that Abel could be used as a pawn if the Soviets catch an American spy. We'd have trade material.

Hmm. Meanwhile, we watch as Gary Powers and other pilots are trained for top secret flight missions over Russia to photograph locations. What happens to Gary's U2 spy plane? Is he broken in regards to giving US intel? Does Rudolph Abel ever break? Are they high stakes swap material? And is a poor US student caught up in the mess in Berlin as the Wall is erected.

Oh it's spy vs spy and cat and mouse game with deft negotiations by Donovan. Tension mounts and Bridge of Spies proves to be a thrilling political action film. Well filmed and acted, this is just the start of the fall movie season. Salute the standing man, and ask, "Do I need to be worried?"

Don't duck and cover - open your eyes and enjoy this film.
Posted by Joanne at 6:00 AM